When Time Is Short, Process is the Long-Game 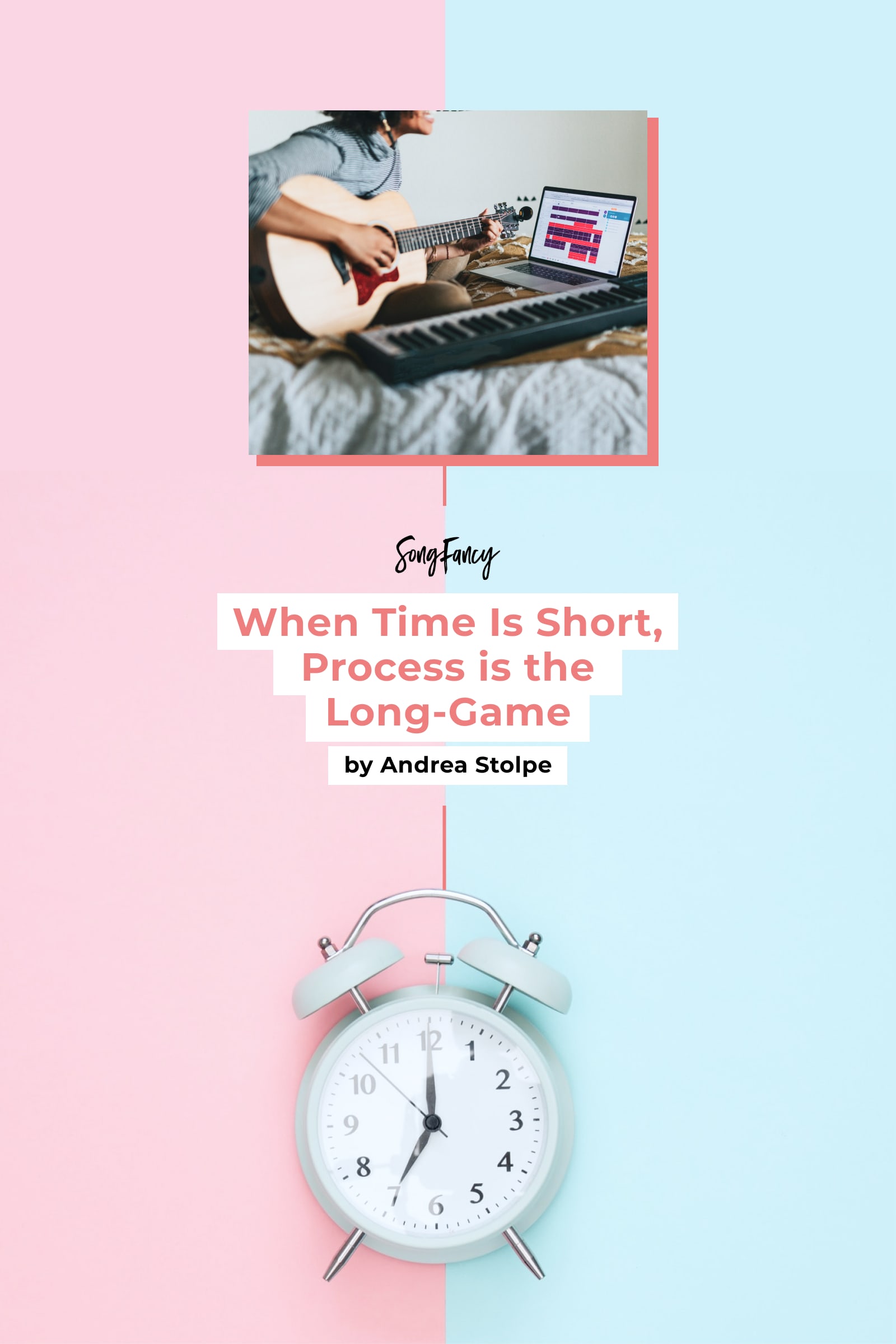 A note from Sarah:

Y’all. I am SO stoked to share today’s article with you. It comes from the amazing Andrea Stolpe. I’ve had her book “Popular Lyric Writing: 10 Steps to Effective Storytelling” for years, and her destination writing process has literally shaped the way I write nearly every song. (I know I’m not the only one!)

She’s been a mentor and an inspiration for many of us and she’s dropping some knowledge bombs on SongFancy today. Get ready, there is so much good stuff in here, you’re going to want to take notes on her 4 points for updating your process. Here we go!

I used to complain there weren’t enough hours in a day.

A morning writing appointment would seep into a late afternoon lunch out, followed by a meeting with my publisher, phone calls, emails, some online teaching or coaching, an evening gig, then popping into a networking event with a friend.

I’d stay up late in the glow of my laptop, refining my social networking platform for the 89th time or tugging on a few lyrics with my guitar.

The next day would be the same—except maybe add an hour-long drive in heavy traffic across LA to visit a studio and writing team in the hopes of getting involved in a new project.

I thought I was working hard. All my time was, after all, spent in pursuit of the dream of making music for a living. But no matter how much time I devoted to this dream, I always felt behind. There simply wasn’t enough time to do all the things I knew I could be doing to push forward with my career.

With four people’s schedules to maneuver, I feel like the executive officer of a small company. No longer can I schedule meetings on a whim, run out to a studio to hear a mix at my leisure, or work out a song idea in my head while I’m driving or throwing together a quick dinner.

I get interrupted … a lot. I work on less sleep. I get pulled in different directions, all of which I care deeply about, but require all of my attention at any given time.

And sometimes, I get anxious, feeling as if no person or passion in my life is getting the best I can offer.

Having a desire to create without the time to create can feel like an enormous burden.

Those we love feel the burden, too, when our attention is further split between our relationships, a demanding or uninspiring day-job, and other responsibilities of life.

So are we just stuck?

Is there anything we can do to relieve the pressure and open the flow of creativity?

One thing is clear—we can’t make more time. To continue pressing up against the glass of our creative life without being able to engage with it is disappointing, even torturous. Instead, we’ve got to focus on the variables we can control. Limited time to write forced me to think hard about my process.

How was I using the time I had to create something I thought had value—that was my first question.

First, I’d have to determine what had value for me as a writer.

Sure, I wanted to write the best songs I could write and entertain or engage thousands and millions of music lovers with my music. I wanted to maintain a staff-writing deal at a publishing company or gain alternate representation that continued to grow my network and put me in music-making situations that not only paid the bills but brought me joy.

But these goals were too abstract, and too focused on who I wanted to ‘be’ rather than the day-to-day steps that in themselves produced satisfaction in line with my goals.

I needed a process for my daily life that brought satisfaction right now, in the present.

My music-making process was laborious. A struggle.

I’d spend hours getting stuck on an idea, trying to structure other ideas around the one that was leaving me stuck. I’d get obsessed with a song, trying to force it to work. The hole I dug was deep and dark, and at times, made me wonder why I ever wanted to write songs at all if it just left me overwhelmed.

It was down in that hole that I realized I’d have to change my process if I was going to continue writing at all.

I decided to radically accept my reality and work with it instead of fight it.

There were four main points I focused on to define my expectations and refine my process: Point 1: Instead of slogging for five hours on a song, I began to slog for just 20 minutes, using that time to follow my first instincts about an idea.

I’d do a lot of free-writing and journaling on song ideas, sometimes while walking and dictating into my phone. And instead of considering the writing simply journaling, I’d mine it for lyric ideas.

Some days I’d find titles and complete verse and chorus sections in my journaling. Other days they’d be a springboard. But always, I’d let the first 20 minutes of working on a song establish the song itself.

Then, here’s the golden nugget—I’d walk away. Just 20 minutes before I was off the hook. I’d do something else, as if I were a wealth of musical and lyrical ideas I didn’t need to scramble for. Point 2: I recalibrated my gauge of quality, evaluating my ideas based on how I enjoyed them, rather than how they labeled me as a ‘good’ or ‘bad’ writer.

Quality, as I had determined in the past, was a narrow gate that determined how clever, or skilled I appeared rather than how much I enjoyed the process of creating. (Ok, Sarah here – Had to pop in because this is just soooo good!)

Writing in short bursts, working up a groove or melody, I could sing nonsense lines over the top and consider whether anything I just sung might actually serve as the real lyric. Many times those lines were capable of being lyric—as long as I didn’t overthink them, or unjustly compare them with an impossible internal judge of quality.

I was no longer at the mercy of my ideas. I was simply the circuit through which ideas flowed. Point 3: I learned to let go and quickly change course if an idea wasn’t working.

If something I wrote in 20 minutes wasn’t grabbing me a few days later, no problem. After all, I had lots of ideas I was developing. Ones that surfaced day after day after day would get finished, purely because there was something there I was excited about. Ideas that got lost never got finished. And that’s okay.

Again, I began to work under the belief that I didn’t need to scramble. Point 4: I took time to determine what was holding me back from finishing songs and projects.

If there were a part of the process I could delegate to someone else, what would it be?

What about working with an excellent instrumentalist?

What about finding a collaborator with a studio?

What about writing for a collaborator whose voice adapts to a genre I’d like to write within?

Instead of getting stuck again, I moved on these ideas. Taking my cues from the entrepreneurial world and business, I ran with my strengths and involved others where I felt my weaknesses lied.

The effect was immediate.

My productivity soared, my enjoyment level raced, and I felt my long-term goals close within reach. Becoming too busy to write became the best thing to ever happen to my creative process.

I used to write on a whim for four-hour stretches. Now some days I get a half-hour four times a day.

I don’t write and rewrite the same line 8 times anymore. I don’t because I can’t. There isn’t time. I’ve got five song ideas going at any given time, and when I feel my interest in one waning, I don’t sweat it. I simply switch over to a different song and push it forward a little more.

My objectivity is fresher now that I haven’t spent hours on a song trying to get it just perfect. I’m okay saying that not every line in my song needs to be a special moment. Some lines are just lines. And I’m amazed at the realization that my listeners are still engaged.

That last push, editing my songs for what I considered personal perfection, required 80 percent of the time resulting in 5 percent of the gain. Totally not worth it.

I never needed more time—I needed a process that served me in the moment, within the life that I had made.

Turns out, real life was the very thing that led me to the creative process that makes that real life worth living. 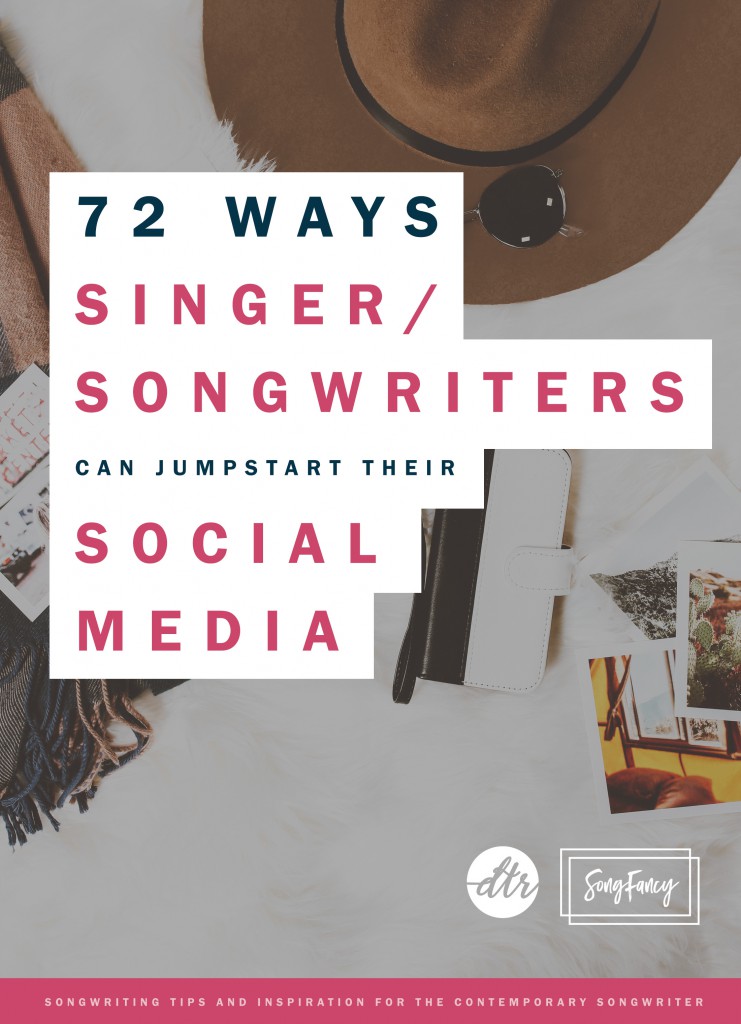 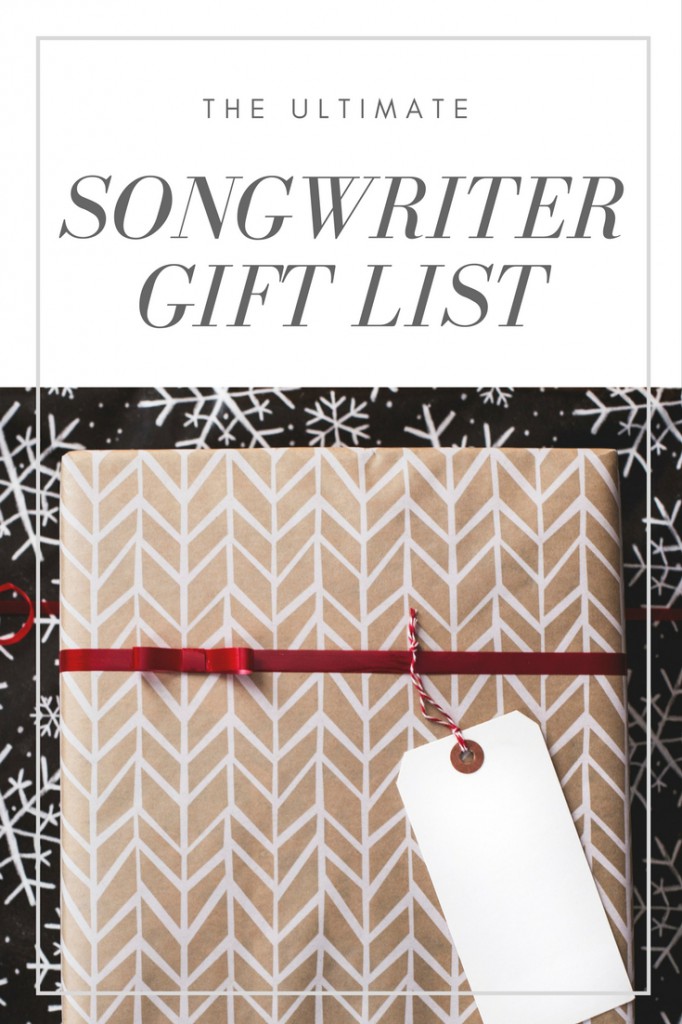 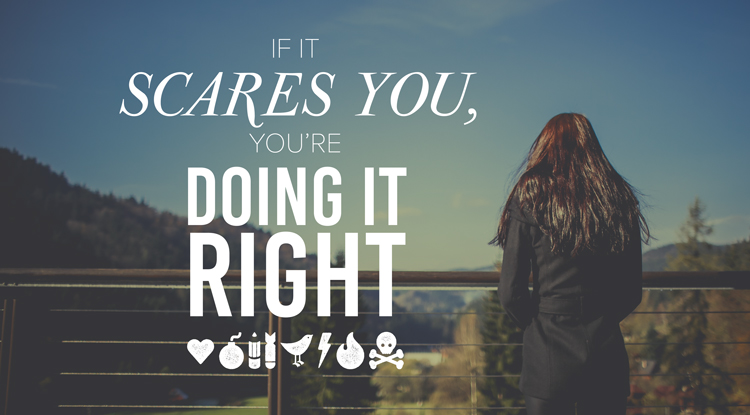 The Next Challenge is Starting Soon! 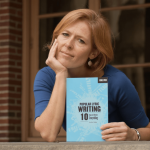 Andrea Stolpe is a renowned, multi-platinum creative consultant whose methodology for songwriters and music artists has been taught worldwide. A writer with 20+ years experience in the music industry, Andrea has penned songs for such artists as Faith Hill, Julianne Hough, and Jimmy Wayne and has worked at companies including Universal Music Publishing, EMI, and Almo-Irving.

Andrea is the author of Popular Lyric Writing: 10 Steps to Effective Storytelling, a staple text for songwriting programs at Belmont University in Nashville, Berklee College of Music, and University of Southern California Thornton School of Music.

Andrea continues to speak out for songwriters and the craft at music conferences nationally and abroad.

Andrea is the Co-Founder of “Writer to Writer” retreats, a series of exclusive experiences for songwriters who are looking for a progressive approach to furthering their craft and career interests. For more resources, or if you'd like to work more closely with Andrea and apply to attend a songwriting retreat, click here.

Interested in learning more tips from Andrea? Download her free guide, The 5 Songwriting Tools that Change Everything.